Reality hit this week. Working a 9-5 job is just as tiring as it sounds. Luckily, I’m working with my amazing housemates//friends, David and Matthew, at the Tshimologong Precinct, which is essentially a really cool start-up helping other start-ups.

On our first day, we opened the large glass doors and were greeted by the receptionist with a warm smile. I felt more at ease as she led us to the large co-working space where we were to wait for our project manager. Surrounded by staff and energetic entrepreneurs, I found myself forced to adjust to their entrepreneurial mindset and time schedule. Tshimologong takes an all hands-on deck approach and everyone is constantly busy running from meeting to meeting and having their hands in all aspects of the day-to-day operations.  I’m more accustomed to a typical corporate setting and more comfortable with defined roles and work plans, none of which are present at Tshimologong. Working at Tshimologong has been one of my biggest “culture shocks” because now I’m working through new frameworks, structures, and an unclear role. I am learning to understand the unique mindset of an entrepreneur and am growing comfortable with the ambitious and ambiguous task of “student engagement.” Although I am anticipative of future roadblocks, I am eager to begin our research.

We’ve been lucky enough to have the opportunity to meet and hear the stories of many of the passionate entrepreneurs that use the co-working space.  I’m a fairly risk-averse person and I have lots to learn from them! All of the entrepreneurs are extremely eager about their work as well as opening the door for younger entrepreneurs! It is a great feeling to be supported in our project by so many different groups of people.

My favorite part of the week was researching Wits University, the nearby University that is part of Tshimologong Precinct.  I could feel the energy of the campus as we walked around campus for a couple hours on a beautiful and sunny afternoon. After spending time meeting as many students as possible, we learned that they are currently in final exams (they last for the whole month of June!) and then go on Winter break for the month of July. We realized this will be a challenge for our research over the coming weeks, so we are trying to reach out to as many students as possible now.

After a long week at work, we went back to the Neighbourgoods Market! We indulged in fun juices and a falafel wrap (Jessica, I can’t help but think of you!) 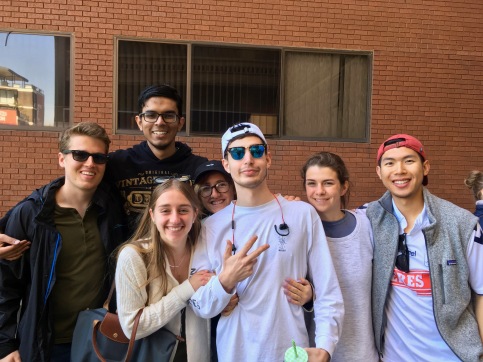 Saturday night we were lucky enough to score second row tickets to the South Africa v. England rugby match. There is a lot of history between this sport and the country. Before the apartheid, Black and White South Africans had separate teams. But with the passing of apartheid, Black South Africans were denied access to any and all rugby training facilities. In 1995, the year following the country’s first democratic election, South Africa hosted the Rugby World Cup. Nelson Mandela donned a Springbok jersey and appeared in center-field to show his support of the sport and team in order to unify the country. His campaign was called “one team, one country.” The Springboks, previously an all-white team and a prime example of the horrors of apartheid, now represented the country’s ability to reform and move forward.

I really enjoyed watching the game, despite knowing very little about the rules of rugby. It’s fairly similar to football so I relied on my also limited knowledge of those rules. Some active fans behind us were much more invested in the game than myself and at one point found themselves frustrated with the current players’ lack of physicality sharing that, “this isn’t tennis, this is rugby.” We were constantly entertained by the other fans around us, especially the man in front of us who proudly waved the Springbok’s flag. At one point he even jumped over the ledge in attempts to get our section to cheer altogether. Unfortunately he was escorted away by security before he could garner everyone’s attention. In the end, the Springboks pulled out an exciting victory!!

Processed with VSCO with a6 preset

We spent our Sunday about an hour outside of Johannesburg, at the Cradle of Humankind. The Cradle is a UNESCO World Heritage Site recognized as the origin of all humankind. The visitor centre has a museum that guided us through the development of humans and our other ancestors over the past three million years.  “Welcome home” were the first words from our tour guide as he led us in while adding that “this is where we all came from.” The centre itself is built in the shape of a burial mound, symbolizing that many of the secrets of our ancestry’s history is still buried underground. Many experts suggest that there is still much to discover across the Cradle which covers over 180 square miles. 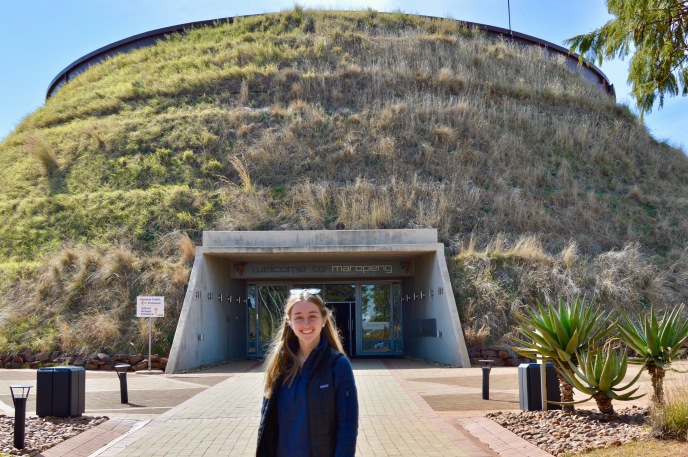 After touring the visitor centre our group ventured over to the world-famous Sterkfontein Caves. The coolest part was that the caves are still under excavation in search of new fossils to further uncover the history of our past. The cave is also home to the incredible discovery of “Little Foot,” an almost complete Australopithecus skeleton that dates back nearly three million years. Going through the cave, there are tons of nooks and crannies we had duck under and crawl through. I felt like a true spelunker!!!!! I am so excited to explore more of Jo-burg this week and coming weekend!

View all posts by sophianewbeginnings